We are combining community mobilization and technology with legal intervention to improve access to basic needs and improve health outcomes for marginalized women.

ICAAD has been working with Nazdeek, a legal empowerment organization committed to bringing access to justice closer to marginalized communities in India. Nazdeek shared with ICAAD the problems faced by women tea garden workers at health centers in Assam, such as: rejection of treatment at hospitals due to caste, tribal affiliation, or religion; being bribed while needing life-saving treatment; and a lack of doctors and medical supplies. Assam has some of the worst rates of maternal mortality in India. We wanted to find a way to prove the systemic nature of the problems leading to high rates of mortality to the government and healthcare providers.

We theorized that gathering data around women being denied service, their access to ambulances and transport, and if health centers had life-saving supplies like blood or medicines, would reveal the systemic nature of gaps in maternal healthcare.

We conducted an analysis of tools that could work given the resources of the population of tea garden workers in Assam — and found an example of a low tech solution that we thought could be adapted from a project in the Congo where they were tracking availability of medication at pharmacies.

To test these assumptions and leverage the power of community mobilization, we decided to pilot EndMMNow, a crowd-seeding model where community members would collect data and advocate for their rights.

In designing our approach for EndMMNow, we shared our analysis and clarified our assumptions with local CSOs and experts. This ensured we had enough critical local input to help inform design decisions. We needed a reporting system that was easy enough for community paralegals to use where we could quickly record, verify, database, and map complaints. Tea garden workers in Assam don’t have access to smartphones or computers, and many families only have access to one basic phone. So we developed a SMS based solution. First, the participants would be trained on their basic legal rights and government entitlements, and trained to use a code-sheet to report violations. As violations were reported, they would be verified by local CSO staff, who would approve the reports on the EndMMNow platform, which automatically maps the violation. After collecting enough complaints, we would then analyze and use the data collected for advocacy. 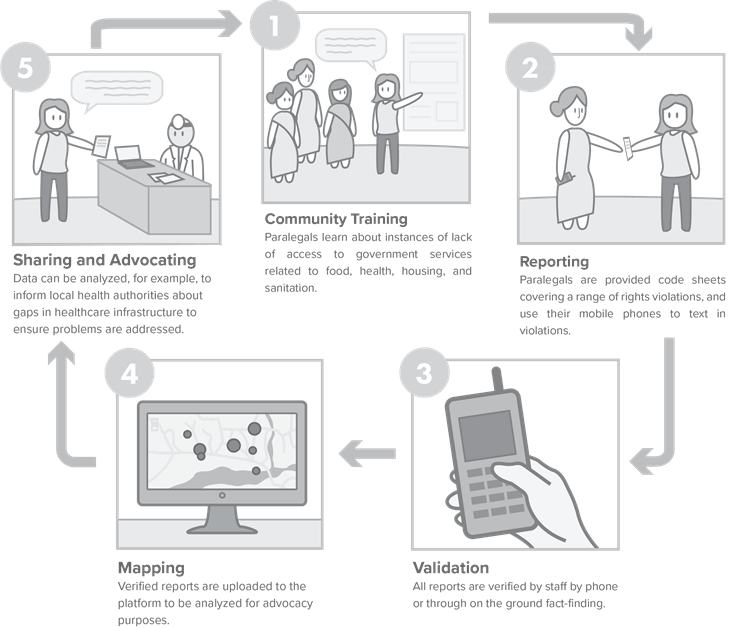 During the first months of implementing the pilot, we had to refine our approach. This meant having more regular trainings with the community paralegals to boost reporting. This connection is important, and having 1-2 engaged “connectors” (a person that knows many people in the community and can effectively spread information) can make all the difference. We also had to provide the data we were collecting to the community (and later policy-makers) in a digestible format, because while the paralegals themselves and CSOs find the data useful, community members don’t access it.

As the map above shows, in the first 9 months of the program, we had quite a number of complaints come in the with reports of maternal and infant deaths and the status of the health centers.

The map below shows some of the systemic gaps uncovered, such as poor ambulance services and a broken referral system. In the case below, a pregnant woman who waited 4 hours for an ambulance was referred to four different health centers because she needed blood. The first three centers had no blood; she died before receiving treatment.

Intervention included community paralegals being trained on: their rights, how to report, how to assist people in the community, and representing the community at meetings with officials. It also included getting lawyers at Nazdeek to assist with filing grievances, developing advocacy strategy, and assisting in direct representation with government and health officials where necessary.

ICAAD and Nazdeek compiled a report based on data and provided further analysis and recommendations. The report was used for media and direct community advocacy with policy makers. The data was also used to support the filing of court cases and administrative complaints. 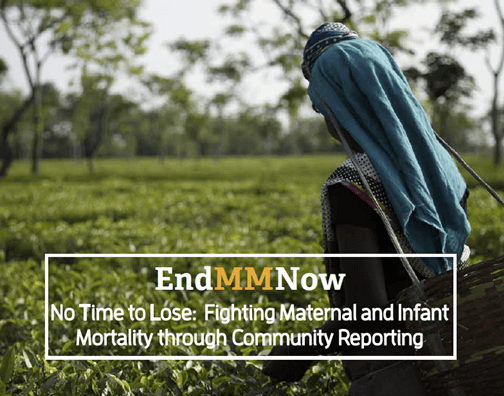 The pilot uncovered many human rights violations related to maternal health, began to change behavior of health workers, and uncovered the inefficacy of grievance mechanisms.

Outside of the local impact, the pilot data was used to inform international advocacy during the UN Universal Periodic Review of India. Uncovering the violations has also led to other efforts to improve conditions for workers on tea gardens, including advocating for better wages. Due to the success of the pilot, ICAAD and Nazdeek decided to replicate the methodology to track access to basic services such as water, sanitation, and healthcare in two Delhi slums where there is a much higher population in smaller geographic area.

The EndMMNow project led to Nazdeek being awarded the World Justice Challenge 2019 Access to Justice Solutions Prize and the 2015 Grassroots Justice Prize.