We are harnessing emerging technologies to help us translate qualitative human rights data into actionable insights.

TrackSDGs is an initiative that focuses on systems level analysis for both private and public sector stakeholders interested in Sustainable Development. ICAAD provides analysis of long-term structural shifts that uncover opportunities to effectively allocate resources to enable progress on the Sustainable Development Goals (SDGs). The initiative relies on two core pillars of national commitments pledged within the United Nations’ agreements: the Universal Periodic Review (UPR) and the SDGs.

The United Nations Universal Periodic Review (UPR) mechanism monitors human rights violations globally through an ongoing peer review process that engages all 193 U.N. Member States. The process results in recommendations that are either supported or noted (accepted or rejected) by the state under review. By supporting certain recommendations, the state creates an obligation to improve upon their current human rights situation.

The SDGs’ focus on sectors where global development can be enhanced through progress on 17 overarching goals. There are also 169 corresponding targets, sometimes referred to as subgoals, that add a significant layer of specificity and depth to measurement. The SDGs are a universal set of goals and targets that U.N. Member States are expected to embed within their policies through at least 2030. They are a product of extensive multi-stakeholder discussions and consultations.

TrackSDGs delivers novel insights on the nexus of international development, human rights, and socially conscious investing by leveraging insights from the United Nations Universal Periodic Review (UPR) and mapping them to the Sustainable Development Goals (SDGs). In 2012, the very first iteration of this project with our partner law firm, Linklaters, started with a mapping of structural discrimination issues using UPR reports from 10 countries. The first iteration of this research enabled us to submit robust submissions to the Human Rights Council (charged with overseeing the UPR). However, without automation, it was difficult to conceive how we would be able to have a global picture of structural issues because our initial pilot required 40 attorneys and ~1000 hours of work.

Then, in 2014, we saw a clear nexus between the SDG targets and the UPR recommendations. It became clear that we could utilize the SDGs as a framework for better understanding structural gaps globally through the 17 goals and their targets. We tested this assumption by manually mapping 1000s of UPR recommendations to the SDG targets. This preliminary set was used to train an algorithm that was developed in partnership with DataKind in 2015. Through this process we were able to test the veracity of our results and had solid levels of both precision and recall. However, our methodology at this point only worked for the 17 goals and not the 169 targets.

With the assistance of Conduent in 2017, a data science and tech company, we were able to develop an algorithm that was able to convert UPR recommendations into the 17 goals and 169 targets using a combination of machine learning techniques. 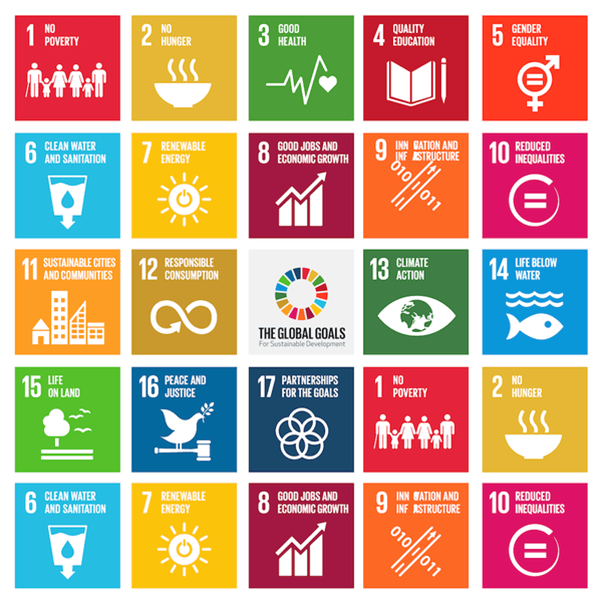 In recognizing that some of the recommendations weren’t correlating with specific SDGs in high numbers, we began utilizing a second layer, keyword lookup. This allowed us to make predictions when specific key words had a high level of correlation with specific SDGs and their targets. After getting a precision score of over 80% and a recall score above 75%, we looked at where the predictions made by the algorithm differed from labeled data. Our team then manually adjusted the data in both sets of data to ensure consistency. This raised precision and recall scores slightly, which provided a fairly robust algorithm that would only get stronger as new data emerged each quarter from the UPR mechanism.

The data limitations in our approach were that SDGs 7 and 12-15 didn’t have enough coverage from UPR recommendations that correlated specifically to those SDGs. This made it difficult to train the data set for those SDGs and there targets. We used a key-word approach to try and compensate for the deficiency, which over time may be ameliorated by a greater emphasis on those subject areas by the human rights community and states. Second, with a disparity in the weighting between different SDGs, one could not draw any meaningful conclusions when comparing countries and the frequency of recommendations that correlated with a specific SDG or its target. Therefore, using statistics (as detailed below), a standardized scale was created to measure each country and each SDG against each other. This allowed us to more accurately identify whether a particular UPR recommendation that correlated with a specific SDG was really an outlier – whether an issue was more/ less emphasized by the international community to the state under review.

In 2018, ICAAD produced our first Report using TrackSDGs data for Clifford Chance. In analyzing 6 countries Clifford Chance was looking to devote financial and pro bono resources for, we provided an opportunity/ risk analysis for each country based on the 4 SDG areas Clifford Chance was interested in exploring: SDG 4 (Education), SDG 8 (Work & Economy), SDG 16 (Peace & Justice), and SDG 17 (Partnerships). Below are the summary charts prepared for Clifford Chance to assist them with their evaluation process. 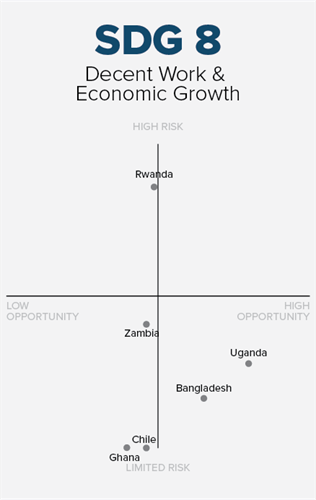 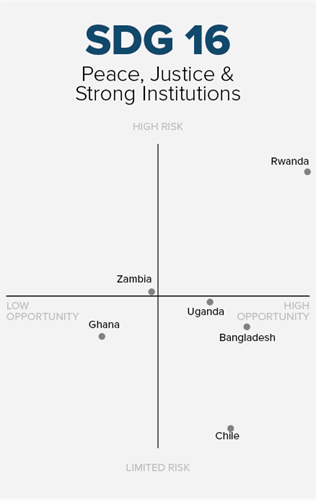 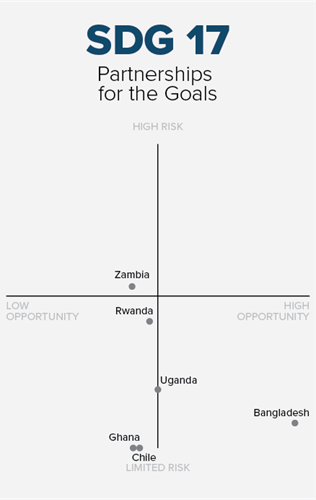 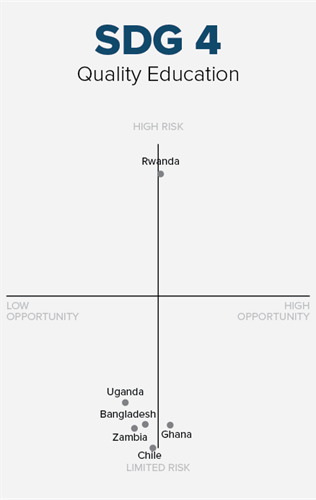 In 2019, ICAAD was commissioned to produce a second report using TrackSDGs data for a pension fund. ICAAD was able to provide an Opportunity and Risk Profile for country-specific investments aligned with the Sustainable Development Goals (SDGs). The mega-trend analysis provided would enable stakeholders to assess long-term structural shifts that affect the strength of democratic systems and norms by analyzing how states compare to their regional and international peers. In order for the SDGs to be successful, global sustainability requires alignment between both business outcomes and societal impacts.

The SDGs are viewed as drivers of sustained macroeconomic growth. Therefore pension funds, whose mandate is capital preservation with a long-term investment horizon, are ideal candidates to make investments aligned with the SDGs, according to a report by Morgan Stanley Capital International (MSCI) and the Organization for Economic Cooperation and Development (OECD).

There is a gap in the research on investing and SDGs since most of the research to date has focused on identifying companies that meet the criteria for sustainable investing. However, the context in which companies operate, i.e. the state, is equally as important since states create the enabling environments in which companies can (or cannot) operate successfully. To fill in this gap in the research, TrackSDGs provides key insights on the Opportunity and Risk of investing in specific states linked to specific SDG themes using the MSCI Economic Social Governance (ESG) actional themes for grouping the 17 SDGs. These themes create a valuable framework within which to assess Opportunity and Risk. The 17 SDGs are aggregated into 5 main SDG Themes: Basic Needs, Climate Change, Empowerment, Natural Capital, and Governance. These SDG themes are an efficient way for investors to match up state screens with screens that assist investors in identifying companies that meet ESG standards. Together, they provide deeper insights into understanding the benefits of direct foreign investment at both the national and corporate level.

ICAAD is continues to ingest new data from the UPR and run it through its TrackSDGs algorithm. With each iteration, the level of precision improves and we keep fine-tuning the process. Eventually, we will be looking to layer additional pieces of data alongside TrackSDGs data to see if more robust and far-reaching insights can be gleaned in combination with other analysis.