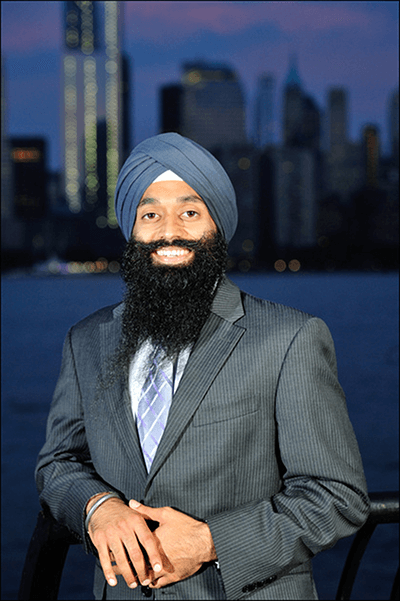 Jaspreet has a Juris Doctorate and Certificate in International law from Florida State University, and is admitted to practice before the Ninth Circuit Court of Appeals. He has his Bachelor’s from Emory University, where he majored in Philosophy and Political Science. Alongside Hansdeep Singh, Jaspreet co-founded ICAAD in 2012.

What motivates your advocacy efforts?

The short answer is that there are massive systems of inequality at play — caste, gender discrimination, racism, and slavery, to name a few — that are deeply rooted in human history and culture and continue to dangerously impact society globally, everyday. International human rights law is truly the first ever global framework to attempt to tackle these systems and provide the basic freedoms all people should have equal access to, and I believe it is incredibly important to promote and enforce that framework. Especially in this post-nuclear, intra-climate disaster, pre-singularity age, humanity will only thrive if it has an enforceable ethical system (i.e. human rights) that works for everyone.

To give some background on my motivations (the long answer): as a child, I witnessed, from afar, the State-sanctioned violence and genocide perpetrated against Sikhs, my religious and ethnic group. While I was born and raised in Georgia, USA, the reverberations of the violence perpetrated against Sikhs in India in the 1980s and 1990s was a constant of my childhood. And the violence touched my father and mother more deeply — my mother’s family, having to hide during the genocide in Delhi in 1984, with my uncle barely escaping being captured by a mob and burned alive; my dad’s elder brother, killed in 1992, his body never found.

In the 1990s, my family took in survivors of police torture in India who were seeking asylum in the US, with three men living with us at different times for close to two years. One had his forearm and hand permanently disfigured when it was crushed by police using a large metal roller; another had his fingernails torn off and fingers burned. Spending time with these men exposed me directly to the horrors of State-violence, but whether cognizant of it or not, every Sikh you meet is living with the intergenerational trauma of those dark times. In addition to that experience, as a brown man and Sikh being raised in Georgia, I was exposed to the racism of the South; bullied and harassed for my choice to keep my Sikh identity, and later, after the terrorist attacks on Sept. 11, 2001, felt the increase of that discrimination and hatred.

Thanks in part to my brother, I grew up with a love for learning and experimentation and began building computers and learning software at a young age. However, more interested in ethics and international affairs, I took up studies in philosophy and political science while in undergrad at Emory University, and became enamoured with existentialist ethics. While considering pursuing a doctorate in philosophy, I realized that I was much more interested in practical applications of ethics, and decided to pursue a career in human rights law.

From my experiences and studies, it became clear to me that discrimination is at the root of violence, but also that racism and hatred can be overcome by tearing down what seem to be insurmountable walls and by building bridges where it seems impossible. I also realized that there is a dearth of data-driven approaches to informing laws and policies, and that the law is sorely behind the curve when it comes to assimilating advancements being made in other academic fields, even though legal policy can greatly impact those advancements, positively and adversely. That’s part of the reason why ICAAD is so keen on transdisciplinary approaches to tackling systems change.

Who or what inspires you?

Throughout my life and in my extensive travels, I’ve met people from all ages and walks of life who have taught me so much but did not have close to the privileges of freedom of movement or access to resources that are available to those of us born in the West. It’s easy in nations with better social safety nets to embrace the maxim “fail often and fail fast,” but it’s an adage of privilege, something you can only do where such social structures exist and failure doesn’t mean poverty and starvation. All people deserve equal access to rights and opportunities to pursue their dreams, and I’m inspired every time we are able to make the future a little more equitable.

Always keep learning and exploring new things. Yes, expertise is important and it’s impossible to become an expert in everything, but even experts in different fields can miss the interconnection between their subject and other disciplines. Exploration and experimentation are at the heart of innovation.

Don’t hesitate to involve other disciplines in your efforts and ask for help. ICAAD has accomplished so much with a small team in large part because we’ve been able to bring on pro bono partners to support our efforts. But also, don’t doubt the power of an individual to make change. I’m also a big fan of triangulating information from multiple, diverse sources, to ensure veracity of information. Too many mistakes are made because of incorrect assumptions.

Finally, seek out mentorship! One of my martial arts instructors, GM Dan Inosanto, once told me that everyone needs a coach — because they can see what you can’t — and leading by example, he still works with coaches even though he’s a world renowned expert and is in his 80s.

Connect with Jaspreet on LinkedIn.