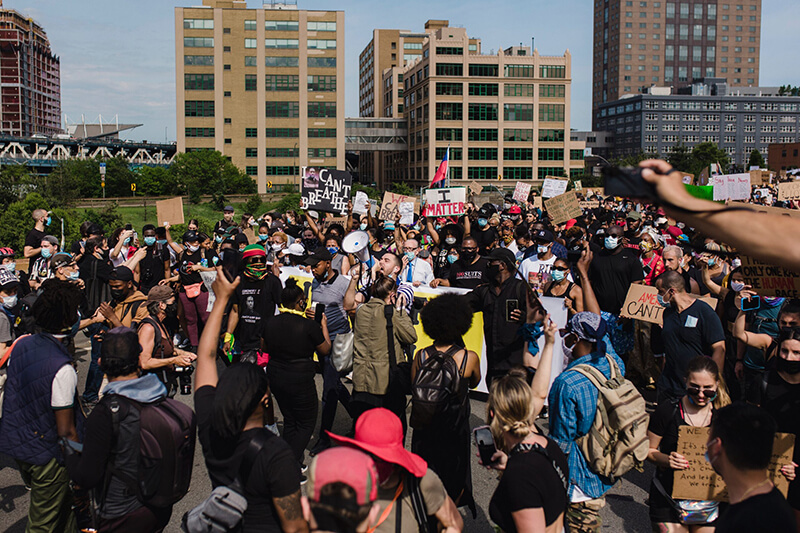 While violently responding to the protests in Washington DC on June 1, 2020, the Trump administration violated international human rights law, and the events in Portland, Oregon are another example. The Black Lives Matter movement shined light on excessive violence in American policing. The events in Portland showcase the systemic use of violence in America and add another layer to the human rights abuses condoned and committed by the Executive Branch.

The disagreement between the Trump administration and Portland officials about the use of federal law enforcement to quell protests raises accountability concerns. International law offers one avenue to highlight these human rights grievances, as the abuses violate several human rights treaties ratified by the United States. In a letter signed by hundreds of organizations, including ICAAD, and submitted to the Human Rights Council, three treaties in particular have been highlighted: International Covenant on Civil and Political Rights (ICCPR), International Convention on the Elimination of All Forms of Racial Discrimination (ICERD), and the Convention against Torture and Other Cruel, Inhuman or Degrading Treatment or Punishment (CAT).

The administration’s actions are unconstitutional, and they violate global norms. ICERD and ICCPR promote universal protections around non-discrimination and civil and political rights. Article 5(ix) of ICERD protects minority communities’ right to peaceful assembly in the United States. It’s abundantly clear that state violence disproportionately affects Black people and people of color. The government’s violent response to protests violates its commitment to eliminating all forms of racial discrimination. The events in Portland further violate the ICCPR. On July 23, 2020, the Human Rights Committee drafted General Comment 37, focused on Article 21, which protects the right to peaceful assembly. The Committee clarified that there is a presumption that States should consider assemblies to be peaceful and not attribute individual acts of violence to groups of protesters.

Federal law enforcement has done the opposite: engaging in “arbitrary arrest and detention” of protestors without providing justification or information on the nature of their arrest. The case of Mark Pettibone, a protester snatched off the street by unmarked federal agents on July 15, 2020, is demonstrative. The Trump administration deployed federal agents under the guise of protecting federal property, but they arrested Pettibone when he was nowhere near federal buildings.

The US Human Rights Network pointed out that the actions in Portland violate Article 7 of the ICCPR, which protects people from “torture, or cruel, inhuman, or degrading punishment.” The ICCPR allows a country to derogate from certain provisions when there is a “public emergency which threatens the life of the nation.” However, the threat the Trump administration is concerned about is graffiti, and derogation does not apply to specific provisions like Article 7 of the ICCPR or discriminatory acts. Thus, even if the administration were justified in derogating from certain provisions of the ICCPR, it would still violate Article 7.

CAT outlines that “no exceptional circumstances whatsoever”, nor orders from an authority, “may be invoked as a justification of torture.” Torture includes inflicting “severe pain or suffering”, physical or mental, on someone as punishment for an act they are suspected of having committed, with the consent of a public official. The unlawful detention of and violence against peaceful protesters, exemplified in Portland and Washington, D.C., fits this definition and other provisions of CAT. The Committee Against Torture, a group tasked with evaluating the status of signatory countries to CAT, previously raised concerns in 2014 about police violence in the United States. The level of force federal agents and police have used in response to the Black Lives Matter protests, both in Portland and throughout the country is cause for further concern.

These instances resemble kidnapping more than a legal arrest.

In Portland, federal agents arrested protesters without cause or explanation. These instances resemble kidnapping more than a legal arrest. From Pettibone’s account, the federal agents intended to inspire fear – blindfolding him, shoving him in an unmarked van, refusing to identify themselves, and not informing him of his location. Being kidnapped is a traumatic event, but the continued presence of those very same armed kidnappers further creates an environment of fear and oppression, contributing to the psychological suffering experienced by protesters. The detentions of Pettibone and others were retaliatory punishment for exercising their First Amendment rights in support of a cause the Trump administration condemns.

Law enforcement in Portland, like in other major cities, also used physical violence against protesters. Even setting aside the hypocrisy of America tear-gassing its own people after condemning the same behavior in Hong Kong less than a year ago, it’s important to note that the UN Special Rapporteur on Torture and Other Cruel, Inhuman, or Degrading Treatment or Punishment has deemed that the use of tear-gas can be a form of torture. Tear gas has been used against protesters as a means of “quelling”  the protests. The use of tear gas and other “non-lethal” weaponry, such as rubber bullets, on protesters has caused fractured skulls, permanent vision damage, and respiratory issues —in the middle of a respiratory pandemic. Just like the arrests, this violence is punishment for publicly supporting Black Lives Matter.

These actions should be and are unjustifiable, but the Trump administration has a dangerous history of normalizing and perpetuating the use of violence, often bordering on torture. It is unsurprising that the administration reacted with such excessive force; it routinely surrounds itself with torture apologists, such as Gina Haspel and Marshall Billingslea, showing that its regard for human rights has always been dangerously low. And as the kidnappings in Portland came to light, John Yoo was brought into the White House for consultation. Yoo authored the so-called “Torture Memos” for the Bush administration in its War on Terror, in which he manipulated language to legally justify the use of torture on detainees. The Trump Administration so far has denied the allegations of tear gas and excessive violence, but video evidence and complaints from Black Lives Matter, DC and the ACLU prove otherwise.

As the fights for racial justice continue, we need every tool in the tool-box.

The international community raised grave concerns for years about  police violence in the United States. In 2014, the Committee Against Torture called attention to the widespread lack of accountability for deaths under police custody, and the UN Human Rights Council held an emergency debate about it in June. Irrespective of the international community’s calls for reform, Trump wishes to expand the presence of federal troops into Chicago and Albuquerque, which carries dangerous implications for protestors and minority groups. The incorporation of the ICCPR, ICERD, and CAT into American law serves as a potent reminder that there is no American “exceptionalism” when it comes to international law. The treaties themselves offer an avenue for the international community and other concerned groups to respond. As the fights for racial justice continue, we need every tool in the tool-box.

Kate Frimet is an Intern at ICAAD. She is studying Political Science at Stanford University with a focus on elections, representation, and governance. You can follow her at @katefrimet.

Sofia Teixeira is an Intern at ICAAD. She is studying International Relations at Princeton University.