How can we hold torturers accountable if we are unwilling to uphold our own laws?

India attempts to justify its practice of torture by saying that it has a good faith obligation not to torture, but not a legal obligation.

The issue before the Ninth Circuit Court of Appeals is simple. India agreed not to torture an individual, Kulvir Singh Barapind, in negotiating his extradition from the United States. The United States was required by its own domestic laws and its international obligations under the Convention Against Torture (CAT) to ensure that Kulvir was not tortured. The U.S. State Department secured an agreement from the Government of India that India would not torture him under the Convention. Following his extradition, Kulvir was tortured by the police in India. The question before the court is whether he should be able to seek damages for his torture in U.S. courts?

We believe the answer to that question, both legally and morally, is a resounding yes, and that’s why ICAAD filed an appeal at the Ninth Circuit Court of Appeals in California on behalf of Kulvir. Laws extending immunity to foreign sovereigns cannot be without boundary; and the United States should not violate its own laws and an international human rights convention that Congress ratified. It’s not just about allowing India to get away with torture, it’s about not making a mockery of the rule of law in the United States. 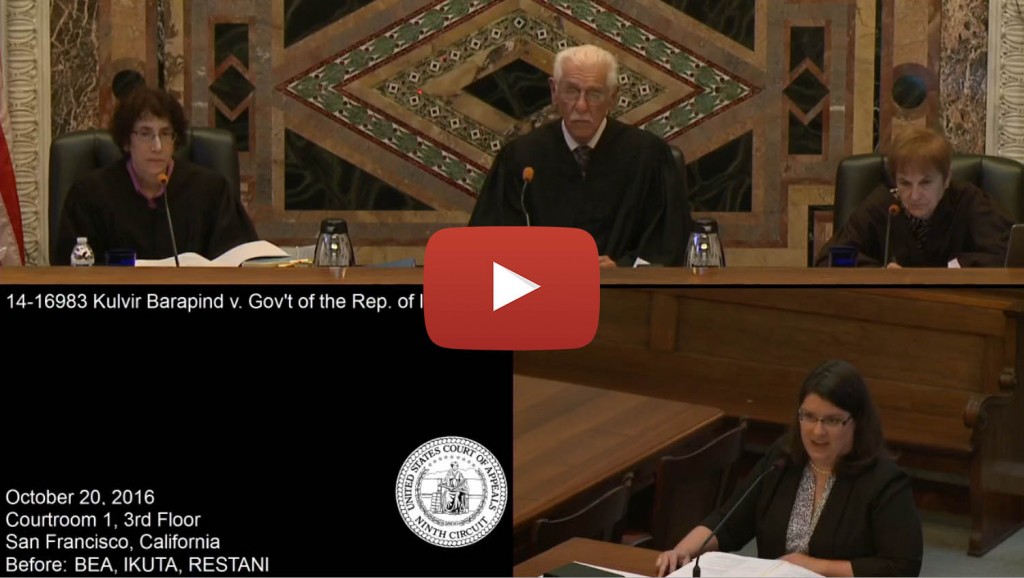 Watch Emily Alban, Associate at Crowell Moring LLP, arguing on behalf of Kulvir and ICAAD at the Ninth Circuit Court of Appeals in San Francisco

The position India is taking in the case isn’t just repugnant, its disingenuous. Attorneys for India have tried to mislead the Court by saying that India wasn’t aware that agreeing to uphold the Convention Against Torture would give U.S. courts jurisdiction, but India’s own government witnesses say that the Convention is unenforceable in India.

Article 14 of the Convention is clear: “Each State Party shall ensure in its legal system that the victim of an act of torture obtains redress and has an enforceable right to fair and adequate compensation, including the means for as full rehabilitation as possible. In the event of the death of the victim as a result of an act of torture, his dependents shall be entitled to compensation.”

The laws of the U.S. do ensure those rights, through the Foreign Affairs Restructuring and Reform Act and a number of other laws. And those are the laws that do not exist in India, because India never ratified the Convention, or created legislation to domestically implement the Convention.

India even argued that the agreement between India and the U.S. did not apply to Kulvir as a third-party beneficiary—much to Justice Bea of the Ninth Circuit’s apparent chagrin, as he, like any rational person, would understand that an agreement not to torture Kulvir prima facie applies to him. 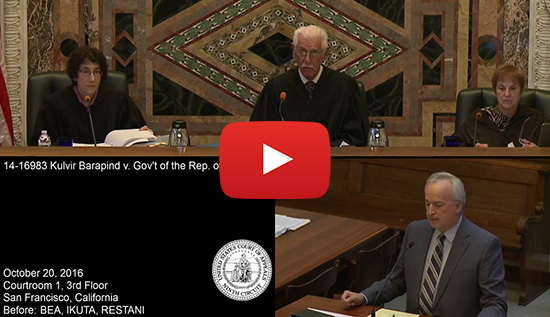 Watch the attorney for India trying to explain how an agreement not to torture Mr. Barapind somehow does not apply to him as a beneficiary.

There are too many arguments by the Indian government in trying to shirk its responsibility, but we will leave you with one last one: India’s attorney attempted to further mislead the Court by stating that Kulvir was arrested and tortured in a separate criminal case from the one leading to his extradition (conveniently failing to mention Kulvir was acquitted of ALL charges in both cases, because they were all fabricated), and claimed that his right not to be tortured ended with his acquittal in the case that led to his extradition.

The right to not be tortured following extradition cannot simply end with the dismissal of charges and the levying of newly fabricated charges. The loophole India is trying to create with this argument would make it far too easy for countries that torture to get away with it. The right not to be tortured is not time-bound, and the United States’ legal obligations hinge on a determination of whether or not the individual has a well-founded fear of future persecution (including torture).

India promised not to torture Kulvir, and doesn’t want to pay the consequences for torturing him. U.S. Courts are the only appropriate courts to enforce Kulvir’s claim for damages, and the only courts where he has a chance to access justice and be compensated for the horrible torture he faced.

Following the opinion of the Court in this case, we would not be surprised if this hotly contested jurisdictional issue will be considered en banc (a hearing before a panel of almost all of the judges currently sitting at the Ninth Circuit), or could be granted cert at the Supreme Court.

ICAAD needs your support so that we can continue our human rights work!