“Volunteers can be agents of change,” one survey respondent answered. Another mentioned “the environment has become less corrupt than what was prevalent before the project.” A recent evaluation of the End Maternal Mortality Now (EndMMNow.org) initiative illuminated dynamic changes in the maternal health landscape in Assam, India since the project started, but also highlighted the need to scale the initiative and continue trainings with current volunteers.

EndMMNow previously released an advocacy report illuminating gaps in service delivery of legally guaranteed maternal health care, the result of months of data collection by volunteers and coordinators in two districts in Assam. Following up with the coordinators and leaders in the project in a post-pilot assessment, respondents indicated:

Through the assessment it also became clear that more needs to be done to keep participants motivated, that providing “know your rights” training courses lead to greater community empowerment, and that a variety of outreach options should be considered, both using SMS and trainings but also via local media-outlets to raise awareness in the community at large. Respondents also suggested scaling the initiative to include more communities in the region, and through the inclusion of faith institutions. 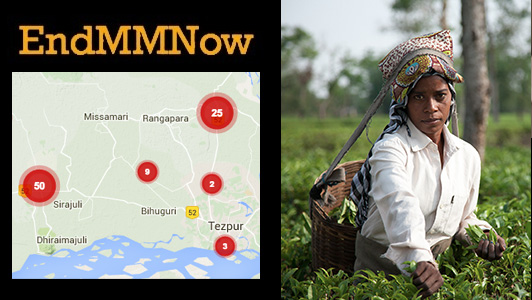