A study on maternal mortality in tea gardens in two blocks of Sonitpur district has revealed serious gaps in emergency medical care for pregnant women. 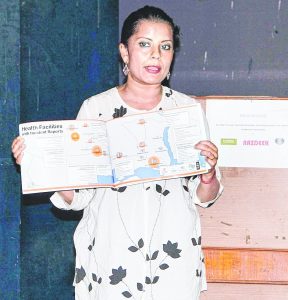 Sukti Dhital of Nazdeek in Guwahati on Wednesday. Picture by UB Photos

Of the 68 pregnant women covered in the study in Dhekiajuli and Balipara blocks, 32 (47 per cent) had to bribe or make informal payments while 20 women (29 per cent) faced lack of medical facilities, including absence of a doctor or nurses in the hospital. Nineteen had to hire private taxis because of a lack of ambulances.

The study also found that 17 women were referred to four different hospitals while in labour. Pregnant women were also not receiving Janani Suraksha Yojana payments, faced discrimination based on ethnic status and improper supply of ration.

Three NGOs – Nazdeek, PAJHRA and New York-based International Centre for Advocates Against Discrimination – conducted the study between May and November last year. They trained and engaged 40 tea garden women volunteers who sent reports about violation of healthcare rights through codified text messages and their responses were mapped on an online platform, including a website – www.EndMMNow.org.

“During the study, our volunteers reported the death of two newborns or stillbirths and four maternal deaths owing to lack of medical facilities or undue hospital referrals. We came across a pregnant woman at Sapoi tea estate who went into labour at midnight but had to wait for four hours for an ambulance to reach the estate hospital. She was referred to four hospitals – Dhekiajuli, Tezpur Kanaklata civil hospital, Tezpur Medical College and Gauhati Medical College and Hospital on the same day. She died while being taken to Guwahati,” executive director of Nazdeek, Sukti Dhital, said here today.

Jayshree Satpute of the NGO said in the area covered under the study, only Kanaklata civil hospital has a functioning blood bank. “The serious crisis puts a huge burden as hundreds of patients from tea gardens come seeking blood. As a result, patients are forced to pay for blood units and arrange for donors in cases of emergency obstetric care.”

“Healthcare facilities in tea gardens across Assam are almost similar to what our study found in the two blocks,” Satpute said.

“Assam has the highest maternal mortality rate (328 deaths per one lakh deliveries) and tea gardens are the major contributors. But since Adivasis are not Scheduled Tribes in Assam, there is no specific health data about them. We hope this study will draw the attention of the government and other agencies to the plight of the healthcare facilities in the tea gardens,” Barnabas Kindo of PAJHRA said.