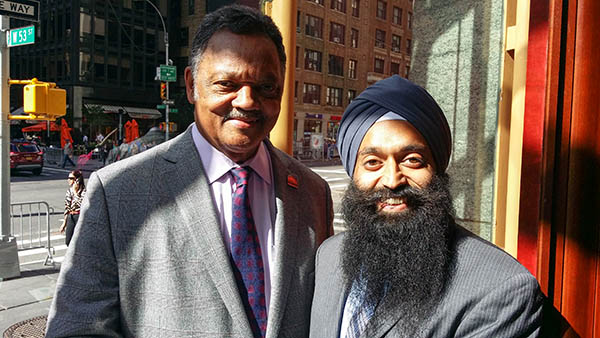 Jaspreet Singh is a 32 year old Sikh originally from Atlanta, Georgia. He is the co-founder of International Center for Advocates Against Discrimination (ICAAD), a new organisation using international law to prevent violence and discrimination against minorities. In the first of two stories, he tells us here about discrimination he and his family faced in his early life.

I was born in downtown Atlanta, Georgia, the biggest and most diverse city in the South East United States. In the eighties it was very polarised by race, with the inner city being predominantly African American and the suburbs largely white. But I wasn’t all that cognisant of people really looking at me differently when I was really young.

That is until we move to the small rural town of Milledgeville, GA when I was 11. The racism there was really deeply embedded. Everyone went to the same school but the black and white sections of town were completely separate.

It was around the time of the Gulf War and I had people yelling at me on the street and in school, calling me expletives, pulling on my turban and telling me to go ‘home’ to Iraq. It weighed heavily on me.

There was one particular incident in the nearby town of Monticello. My dad and I were driving back from the airport after picking up a religious leader and his wife who had come from India to do a religious ceremony at our house. Bhai Jeevan Singh was very spiritually enlightened individual; very charismatic, peaceful, devout and quite elderly. He, his wife and my dad were all wearing the 5 Ks, including the kirpan (small ceremonial dagger) on the outside of their clothing.

So we were driving through Monticello when our car got a flat tire. We drove into a gas station and my dad asked the attendant if he could borrow a socket wrench so he could change his tire. He got a very rude response, and as he walked back to the car a police car speed up to us with its siren and lights flashing. A police officer jumped out with some kind of huge assault rifle, started waving it around wildly and shouted at us to all get out of the car and lay on the ground.

With his gun trained on us, he pointed at the kirpans and my dad tried to explain they were just a symbol of our faith, not weapons, just a reminder of our religious duty to protect others. We were just trying to fix a flat tire.

But he didn’t listen, he yelled crazily while waiving the gun around, and we were all very, very scared.

Thankfully at that point two other police cars pulled up, and one of the local officers who stepped out recognised my father. The first officer still had the gun trained us, but eventually his colleagues talked him down and he went into his car and threw the wrench over to us.

Once we’d changed our tyre we were given a police escort out of the town. It’s sad, but because of that incident I’m still very wary of rural areas. But it also helped spur me on to the work I’m doing against discrimination today.